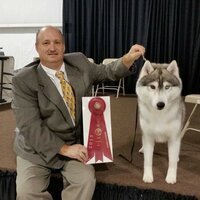 Timothy “Tim” Daniel Dorn, 54, husband to Lana Ridley Dorn for 29 years, went to be with God on Sunday, November 6, 2022 after a sudden illness. Tim was originally from Simpsonville, SC. Currently living in Douglasville, GA. He was a graduated from Hillcrest High school, class of 1986. Surviving, in addition to his wife, Lana, are his father, Robert (Bob) Cooley; sister, Tammy Dorn McCall (husband Mike); His two nephews Landon McCall (Alexis), Logan McCall; great nephew Kamden McCall; Father-in-Law, Monroe “Lanny" Ridley; Sister-in-law, Paula Welter. He was predeceased by his mother, Mary Lou Kaiser Cooley. Tim was a past Master and member of the Wade Hampton Masonic Lodge #404. He was Master of the Lodge in 1999. Tim was a co-owner of Bahari VIP Show Dog and Pet Transport. He traveled the country doing what he loved. Tim was an avid South Carolina Gamecock fan. He loved his Gamecocks and College football. Only thing he loved more were his Bahari Siberians. Tim received his first Siberian Husky for Christmas in 1986, Sebastian, a Black/white blue eyed Siberian. He fell in love with the Breed. He and Sebastian started Obedience with the help of a co-worker of his mom, Mr Bill Lawrence. In 1987, Bill introduced Tim to his lifetime passion, AKC Conformation dog shows. With the help of Bill, Tim would meet his mentor and lifelong friend, Tommy O, (Thomas Oelschlager). With the guidance and mentorship of Tommy O and Marlene DePalma of Kontoki, Bahari Siberians were founded. In the 32 years that followed, Tim was very active in Siberians. 29 of those years were with his wife, Lana. They are AKC Breeders of Merit. He was currently serving as Vice President of the Siberian Husky Club of Greater Atlanta, was an active member of the Atlanta Kennel club and founding member of the Siberian Husky Club of Greater Greenville. He was a past member of the Siberian Husky Club of America and Greenville Kennel Club. He will be greatly missed by his wife, dogs, fellow breeders, exhibitors, judges, friends, and family. A Celebration of Tim’s life will be 11 o’clock, Saturday, December 3, 2022 at Fletcher Funeral Service. An inurnment will follow in Greenville Memorial Gardens. Godspeed Tim In lieu of Flowers, please donate to any of the following 501c non-profit. TaketheLead.org SamUrgency.org MUSHRescue.com