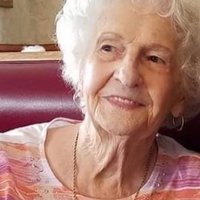 Shirley Ann Burgess Horne, 84, of Fountain Inn, went to be with the Lord on Wednesday, June 2, 2021. Mrs. Horne was the widow of Earley “Bunt” Horne. Mrs. Horne was born in Union, SC to the late Arthur Vance Burgess and Ida Stines Burgess. She enjoyed reading, traveling, cooking and shopping. She retired from Dan River Company, and enjoyed a second career at Hamrick’s before retiring in 2004. Surviving is her sister Marcella Smith, and her husband Isaac, and her brother, Bruce Burgess and his wife Peggy both of Jonesville, SC. Mrs. Horn is also survived by her daughter, Sherry Pettit, wife of Michael “Pete” Pettit, and daughters-in-law, Debbie Horne of Fountain Inn and Debra Tollison, of Summerville, GA. She was the beloved grandmother of six, great-grandmother of fourteen, and great-great- grandmother to one. She was predeceased by her two sons, Terry and Timothy Horne, and five siblings, brothers Howard, Larkin and Jay Burgess, and sisters Blanche Palmer and Vivian Rochester. Funeral Services will be private